The red desert of Desierto Tatacoa 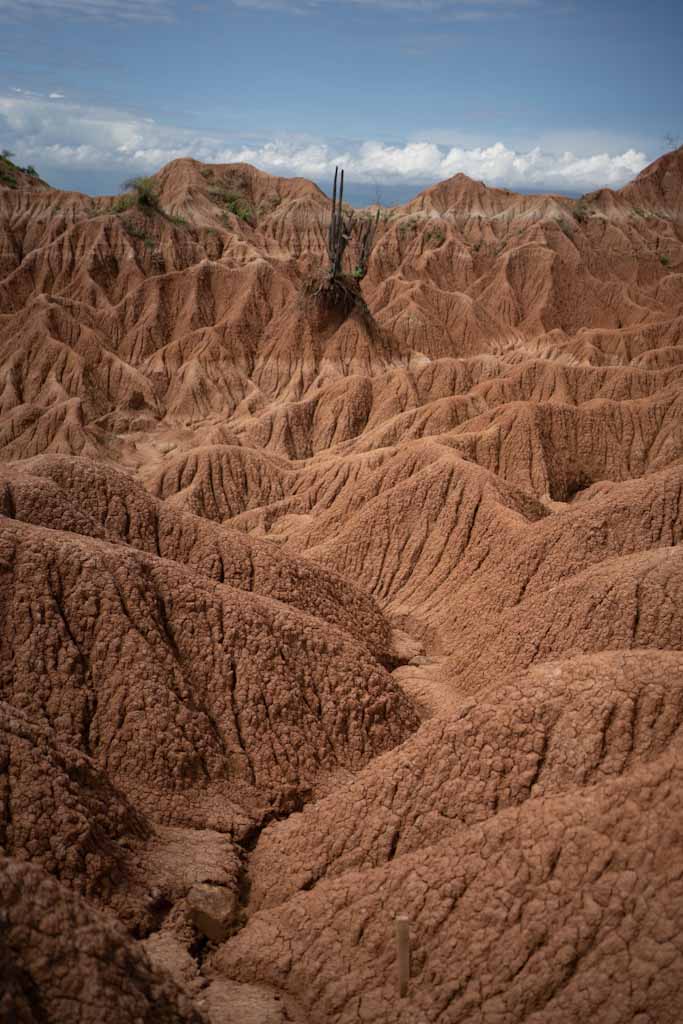 What the hell did I know? The pictures were impressive, and ’Desierto Tatacoa’ (speak out loud!) sounds great. Turns out the name was already given by the Spanish in the 16th century as a reference to the many rattlesnakes in the area. And if there is one animal I am scared of… exactly.

(more pictures of Desierto Tatacoa can be found here)

But there was no way back anymore, after traveling an entire day from Bogota southwards in a cramped bus. Colombians call it highway, it is more a two-lane road. Once I got off the bus near the small town of Aipe, I had to walk across the village, and felt like the bounty hunter entering a western town, where all the locals are watching you.
But I didn’t shoot them, no worries. Beyond the pueblo was a hacienda. Careful not to make too much noise, to not rattle any snakes that might be hiding in the grass, me treaded carefully through the meadow. Over two make-shift bridges, which seemed to make for pedestrians only. But the locals had decided it was suitable for motors as well. Because this was by far the easiest way to get to the other side. To the town of Villavieja. Crossing the river in a small narrow boat, powered by a second-hand diesel engine.

It was probably a sad sight, the Dutch guy on the mountainbike that’s too small, alone in the middle of the desert. Well the bike isn’t too small, the saddle just can’t be adjusted in height to someone at least ten centimetres higher than the average Colombian.
The only other people on this road are the taxi drivers in their rikshaws, taking tourists into Tatacoa in a comfortable and sensible way. But I prefer my freedom and flexibility, to go where and when I want to. So the mountainbike seemed a fair option for the six kilometre stretch.
This, for some strange reasons, is an often overlooked area of Colombia. Maybe it’s too far away from the Medellin-Bogota axis and everything around it. Living circumstances are prohibitive as well, it must be said. Villavieja, the colonial village closest to the 330 km2 huge desert, seems to move at a much slower pace or no pace at all. One time, during dinner, a loud bang scared us. The locals were undeterred, used to mishaps like an electricity breakdown, and had candles burning everywhere inside the village within two minutes.

The desert itself, though, was another level of heat. Tatacoa is tucked in between mountain ranges, with the Nevado de Huila (peaking at around 5’700 metres) stopping most of the rain. Over the last couple of centuries, that allowed this area to get drier and drier, into a dry tropical forest.
The weather forecast had been very promising, with lots of clouds but no rain. Yes, the strange thing is that it rained a lot here as well, as my new Swiss-South-African friends would notice the day after. I was lucky today, though on the other end of the receiving scale.
These small hills were gently flowing, with low vegetation left and right, as you would expect. But after thirty minutes of cycling, and a chain that got derailed twice, something changed. The soil was becoming drier and, on the right side of the road, ocher. This was the famous ‘red desert’ of the Desierto Tatacoa, the part you would see on all the pictures.

It wasn’t really red now. It was more of the rusty brown sort, with some traces of white on the ridges. Because these looked like miniature mountains, with sharp incisions marking where the rain usually flows down. As almost by mistake, a cactus or a tree popped up here and there. Apart from that, nothing.
The Mirador de Miguelito (the first lookout) gave a neat glimpse. A storyteller couldn’t have done it better. A teaser, telling people there might be more ahead. From the roadside you had an amazing overview. There were no marked trails here. You could go down of course, and run the risk of hearing the tatacoa sound of a rattlesnake. So I choose wisely.

The main area of the red part of the desert (there is a grey area as well) was just around the corner. Around the famous observatory, known for the unobstructed nightly views of the stars. It’s why the few tourists that come here often opt to stay in one of the huts here, or in the luxury hotel with pool a bit further up the road.
Three locals were taking care of the visitors kiosk, nothing more than a fridge, a bar and a couple of chairs protected by some sheets acting as a roof. The asphalt had effortlessly given way to just dirt. From the lookout point, a moonlike landscape unfurled. Dozens and dozens of small mountains, without any obvious organization.
It was surprising how small this area actually was. On pictures it looked more like another version of the Grand Canyon. But this entire stretch of ocher was maybe two square kilometre. I could almost feel a sense of disappointment in me. But then again, a trailhead was inviting me to go down and explore. Why not?

The stairs took me down maybe fifteen metres. These really were mini-hills, not even mountains. Shaped naturally by the alteration of heavy rain on these clay lands – which caused thousands and thousands of gullies down – with long dry spells, eroding and almost pulverizing the clay.
Today it meant the hills were ocher and dusty, you could almost wipe off the sand with your hand if you were allowed to touch them. But the narrow trail was partly muddy, betraying the way the rain flowed a couple of days before. It also explained the occasional fruit-bearing cacti. A trace of life in the middle of this nothingness.
This felt like walking on the moon. Well, at least how I would imagine walking on the moon feels, with gravity added. There was a trail, but you could deviate from that a bit as well. It curved its ways through the hills, sometimes over it, to the other end.
It was getting greyer here, the map showed there was even a campsite near, and the first trees started to grow again. Couldn’t imagine sleeping here for a night in a tent, in the middle of a nature that had been hiding for me today. Tatacoa.
There were branches of dead trees here. Some black vultures were hovering around, one of them would sit motionless five metres away from me during lunch a bit later. I could slowly start to feel the skin on my face burn. The precipitation was slowly turning out to be incorrect, one cloud after the other disappearing from view. This was now an unforgiving place to be in for humans. This was no man’s land.

The morning symphony of canaries, parrots and falcons had all but been drained out now by the heat. After climbing back up the hill towards the lookout, I had to think of why the Spaniards would have called it the Valley of Sorrows, the nickname for Tatacoa. Was this the area where troubled souls came to consider their sins? Were these red and grey hills just burdensome for the Spanish, as these plains might have been hard to conquer or hard to defend, surrounded by the Central and Oriental Cordilleras (mountain ranges)?
A rare tree had provided cover during lunch. To my surprise there was even a small tour party, talking in Spanish. Still no foreign tourists around. I continued at my own pace, going the smaller eastern part of the red desert. Walking the ridge supplied plenty of views over the canyon, which was getting wider here. These looked more like canyons, and there were several rocks pointing right up into the sky, coming out of nowhere.
There were peach cacti everywhere when I walked down again. It was by now becoming almost too warm to stand still and take some pictures. The three litres of water I had taken with me were down to the last bit. This was no man’s land indeed.

Giant cactus seemed to flourish here. They must get their nutrition from deep down in this copper-colored soil. I was wondering what would happen if I would move in the other direction, away from the red and hilly parts into the real desert again, with its small bushes and rocks and probably snakes and no protection from the sun nor the dry wind. But I was wise enough not to venture around.
My mountainbike was still waiting for me at the mirador. The three locals were still sitting in the same position at the kiosk. My order for a Gatorade was probably doubling the turnover for that day. One last look down into the red valley, that unforgettable view I would probably never see again in my life. 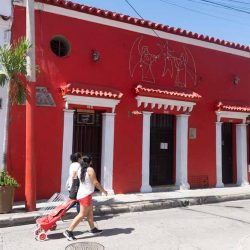 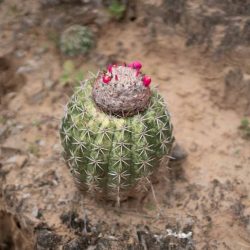